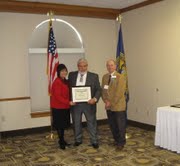 The Southeast Nebraska Resource Network is proud to nominate Alan Richard for the Connecting Nebraska Award for 2012.

Alan has been a steadfast volunteer in his home community, county and for the southeast Nebraska region. After leaving the corporate world in 1998, Alan moved to Pawnee City to enjoy the country life. He soon became involved with an NRD lake project near Pawnee City and with zoning issues. As a result he is now the secretary for the Zoning Board and the Board of Adjustment.

Other activities locally include the Pawnee City Chamber of Commerce and the Pawnee County Development Corporation. He has served as president of both and led the campaign to pass LB840 and the city sales tax which have helped complete numerous projects. He is currently leading a new organization recently formed to develop an Assisted Living Facility in Pawnee City.

Regionally, Alan has served as president of SENEDA (the Southeast Nebraska Economic Development Association); is a member of the 5 county Partners for Progress and an active member of SERN. He has served as president of the Five Rivers RC&D for the past 3 years and has helped them survive loss of federal funding and reorganize to stay a viable entity working to better the 8 county region they serve. It is a pleasure to nominate Alan Richard for this award and to thank him for his hours of volunteer service to his community, his county and to southeast Nebraska.