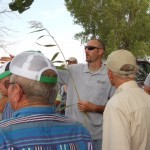 The Northeast Nebraska Weed Management Area (NNWMA) in cooperation with the Northeast Nebraska RC&D Council and the Nebraska Environmental Trust held a tour recently at Niobrara State Park.  “The Good, The Bad and The Ugly of Noxious Weed Control” offered the 32 participants an education on noxious weeds and control methods being used.

First stop was the Niobrara Public School to hear from the student leaders about their Purple loosestrife bucket garden.  Students rear the insects the feed on this weed and then later release them into infestations of the plant.  These biological control insects feed exclusively on that plant.   Students shared with the group the many life skills they’ve learned in doing this project.  The NNWMA and the South Dakota/Nebraska Purple loosestrife groups have assisted teacher Sharla Hanzlik and the students over a number of years with this project.

A visit to the Niobrara boat ramp offered a look at native Phragmites and Purple loosestrife in their natural environment.  Experts pointed out that both native and non-native Phragmites are growing in the area, and often in the same spot, so control methods are difficult to implement.

Salt cedar is another noxious weed that has shown up along the Missouri River in Nebraska and South Dakota.  The NNWMA and partners have been vigilant each spring and now in late summer as well, to get out on the river and the sandbars to keep up the fight.  They use boats to get to the areas of infestation and then walk with backpack sprayers and buckets.  They spray the larger ones and pull out (and carry out) the small plants in an effort to control its spread.

The group was shown Canada thistle and Phragmites in an infested area which NE Game & Parks Commission manages.  Previous efforts to control this particular situation haven’t worked so well so plans are to conduct a prescribed burn to clean up the field and then farm it for a couple of years.  If they get the weeds in check then they’ll reseed with native grasses and forbs.